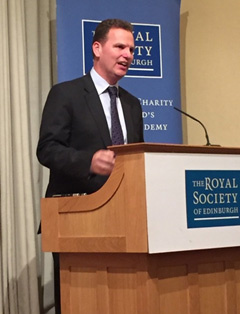 Professor McInnes, the Muirhead Professor of Medicine and Director of the Institute of Infection, Immunity and Inflammation at the University of Glasgow and chair of RACE, has been recognised "for his outstanding contribution to the field of immunology".‌

In what was a double celebration of Professor McInnes’ world-leading research and impact in his specialist field, the Sir James Black Prize Medal was presented to him at the Royal Society of Edinburgh following a lecture he gave to a large and influential audience on "Cures and Curiosities in arthritis – towards a brighter future".

Professor McInnes said: “This is an unexpected but highly appreciated honour from the Royal Society of Edinburgh. It reflects the work of many friends and colleagues in the University of Glasgow and beyond who have worked tirelessly over the years as we have sought to understand and treat better the myriad diseases that can arise from the immune system in disorder.

"The Sir James Black Prize Medal is one of the very top awards that can be given in medicine. I feel honoured and humbled in equal measure.”

One of the leading figures in global research into rheumatoid arthritis, Professor McInnes has been widely published and his work has been hugely influential in new approaches and treatments to inflammatory disease.

Professor Anna Dominiczak, Vice-Principal and Head of the College of Medical, Veterinary and Life Sciences, paid tribute to her colleague. “Iain McInnes is a truly inspirational figure and I am absolutely delighted that he has been recognised in this way. Sir James Black was awarded the Nobel Prize for the advances he championed in medicine, and to be given this honour is testament to the regard in which Professor McInnes is held, not just here in the UK but across the world."